Note: The cover image is from Wikipedia and produced by Arne Nordmann

We all love images. They convey a lot of information very quickly and are often easier to digest than the written word. Our brains will accept them as fact, even when they aren’t. We stack the images up and show them in rapid sequence to form movies and TV shows. To the point where many humans don’t read, but watch a screen to get their information. That isn’t likely to change even though a single image can be millions of bytes long and a TV show or movie can be many tens of billions of bytes after compression.

For a long time all of our digital images came in set sizes. Faxes were a set resolution and the width of paper was assumed. Early computers often used resolutions measured in common multiples like 320x240 and later 640x480 or 1024x768. Now we often use the definition of “High Definition” or “HD” to define our image resolutions. It did get a little busy over time as figure 1 shows. 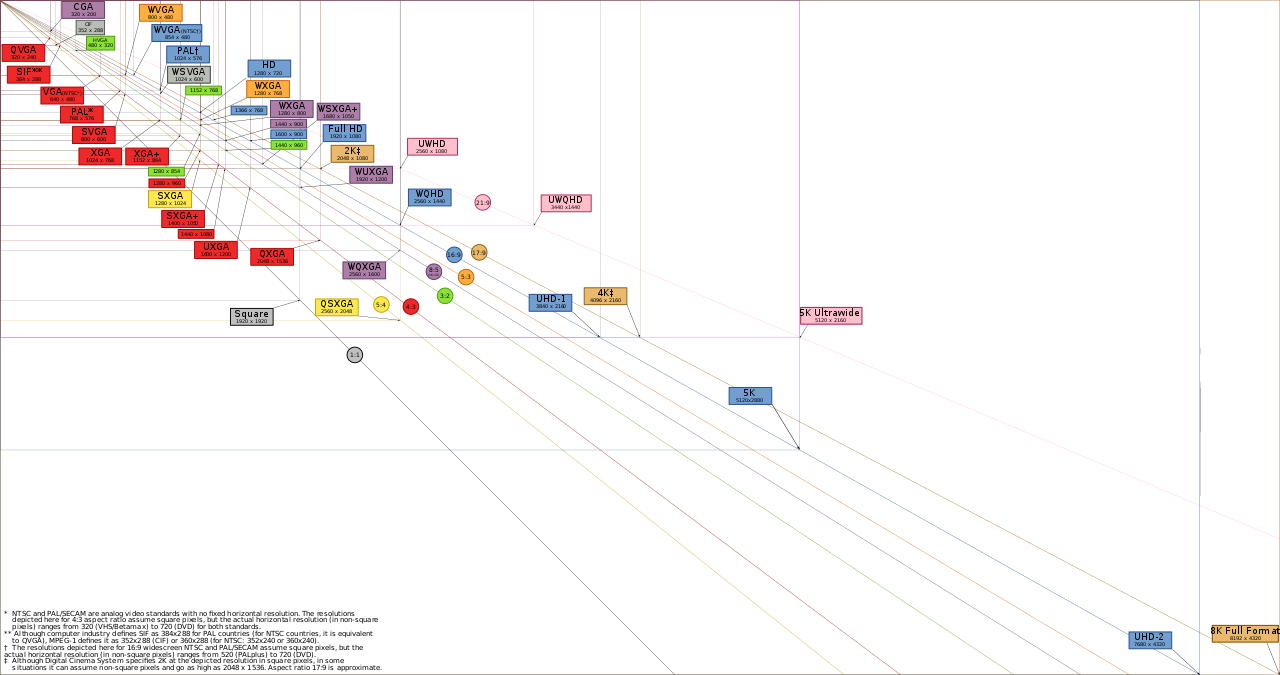 Our data encoding formats have fields in them that tell us at least one the dimensions so we can display the image on a screen or print it to paper. What if the receiver didn’t know what my format was? Looking at that chart you can easily figure out that many of these resolutions can be derived from a size. Mix in that images can actually be any resolution, that compression can change the byte counts and someone unfamiliar with the encoding format will have no chance of viewing the image.

Let’s use the anticryptography thought experiment of communicating with an alien being. They share no cultural, linguistic, or possibly biological frame of reference with us. The best part for this discussion is it has been a real life problem for some people.

How is an alien going to even know a stream of signals is an image anyway? Maybe they think it’s music and really don’t like our taste in beeps. To be honest, most image encodings give little to no hint that they are images to an observer with no common frame of reference.

When Frank Drake was going to use the giant radio dish at Arecibo, Puerto Rico to send a message to the Globular star cluster M13 in 1974, he needed something that could be understood with little more than the concepts of math and science that an advanced society would have. Working with Carl Sagan the cover image is what he came up with. It wasn’t in color, but black and white. The black in the image we can call a 0 and anything colored we can call a 1.

He broadcast this message at a power of 450KW at 2,380MHz. A one was shifted 10 Hz up and each symbol was sent for a 10th of a second. The hope was a receiver could tell it was a regular signal encoding 10 bits/second. For humans the 10Hz shift and 10 bits/second would be easy to see or hear with common equipment of the day. Hopefully anyone else with RF gear working around that frequency would be able to receive it and record the bits also. (We really needed to repeat it for days if not years for any hope of it being recognized let alone recorded)

The total message was 1679 bits long. This was the most interesting choice of the whole operation. 1679 is semi prime, meaning it is the product of 2 prime numbers. Prime numbers will be a concept that any civilization with math will have run across. Seeing that the message is 1679 bits long will tell someone that it is possibly a message in 2D as either 73 across by 23 down or 23 across by 73 down. Trying 73 across first will result in a garbled message, but one that is intentionally not random as can be seen in figure 2.

When the receiver uses the 23 across by 73 down they start to get a regular pattern that has larger structures drawn in it as can be seen in the cover on the top of the post. The first 4 rows are the numbers 1 through 10 encoded in binary, but with the 4th row as a “least significant digit marker”. I think this is a mistake on multiple levels, but hopefully base 10 is obvious and that 4th row doesn’t confuse them.

The next section is the atomic weights of the elements of DNA. I’m not sure that would be obvious to anyone and it doesn’t help that it uses a number (15) that was not used in the line above. They are aliens so I guess we assumed they were smart enough to read what we meant.

The foundation of DNA are encoded in a lot of assembly.

We draw people in the crudest form possible, but try to encode the average human height in the wavelength of the message (14 times as long so roughly 5' 9.4" or 176.4 cm).

The solar system is encoded with the sun being the big item and the gas giants having 3 or 2 dots for size. Earth is above the plane of the others and centered under the human figure. This may be the clearest part of the diagram and probably should have been earlier.

The last part is the giant dish itself. The “M” is there to represent it is a giant paraboloid reflector. There is the number 2430 encoded in there that if multiplied by the wavelength will give the size of the dish. That seems like bragging at first but might be important so the receiver knows roughly what we might be able the hear and how much gain we used to get the message out.

If you read what I wrote about each part you will come away thinking I don’t give them much credit for this effort. That’s not a good take away as I think they made a great attempt. While I’m not sure an alien culture would get all of the concepts out of it. I do believe their choice of 1679 bits was raw genius and more important that anything else.

That one design aspect means a receiver has a good chance of figuring out that this is an image and a 50% chance of getting it right once they do. Even if they flip the dimensions it will be obvious which one is more correct by the larger structures in the correct one. This gets an image to alien culture at it’s highest probability. Everything else relies on this one part working.

If they had more transmit time they could even have led in with a 23 bit sync pulse and put a quiet zone before the 1679 bits. This would allow a listener to start recording and give them a hint of the modulation and first dimension. It is the use of the semi prime that makes this potentially possible and one of the best attempts at anticryptography to date.